+Myth: An Ice Core Shows a Spike in CO2 Levels without a Spike in Temperature

References are cited as follows: "[#]", with "#" corresponding to the reference number given in the References section at the end of this post.

The myth claims that an Antarctic ice core revealed a recent rise in carbon dioxide (CO2) levels, without a concurrent rise in temperature. Thus recent CO2 increases did not cause much recent warming.


(I present evidence that increased CO2 caused most of the recent global warming in "Myth: Attributing Warming to CO2 Involves the Fallaciously Inferring Causation from a Mere Correlation".)

potholer54, a.k.a. Peter Hadfield, also addresses Tony Heller's defense of the myth. potholer54 does this by citing published evidence to explain why Antarctic temperature trends during recent industrial-era global warming should not be expected to follow the Antarctic temperature patterns reflected in the ice core record for warming in the most distant past. This is because:


Thus potholer54 rebuts the myth [93, from 12:47 to 15:04] in a different way than I do, though our explanations remain compatible. So I will not focus on potholer's rebuttal in my discussion in section 2 below.

Scientists justifiably use correlation between two factors as part of a cumulative case for a causal relationship between those two factors, as I discuss in "Myth: Attributing Warming to CO2 Involves the Fallaciously Inferring Causation from a Mere Correlation". In light of this, some individuals attempt to undermine the case for CO2-induced warming by showing that recent CO2 increases do not correlate with recent temperature changes. Some of these individuals estimate past temperature changes and CO2 levels using proxy data from ice cores in Antarctic. They argue that these ice cores show a recent CO2 rise without a recent rise in temperature; thus increased CO2 does not correlate with recent warming, and CO2 did not cause most of the recent warming [1, from 11:26 to 13:42; 2 - 5; 36 - 41; 51, figure 110]. This is the myth this blogpost focuses on.

Below are several images myth proponents present to make their case: 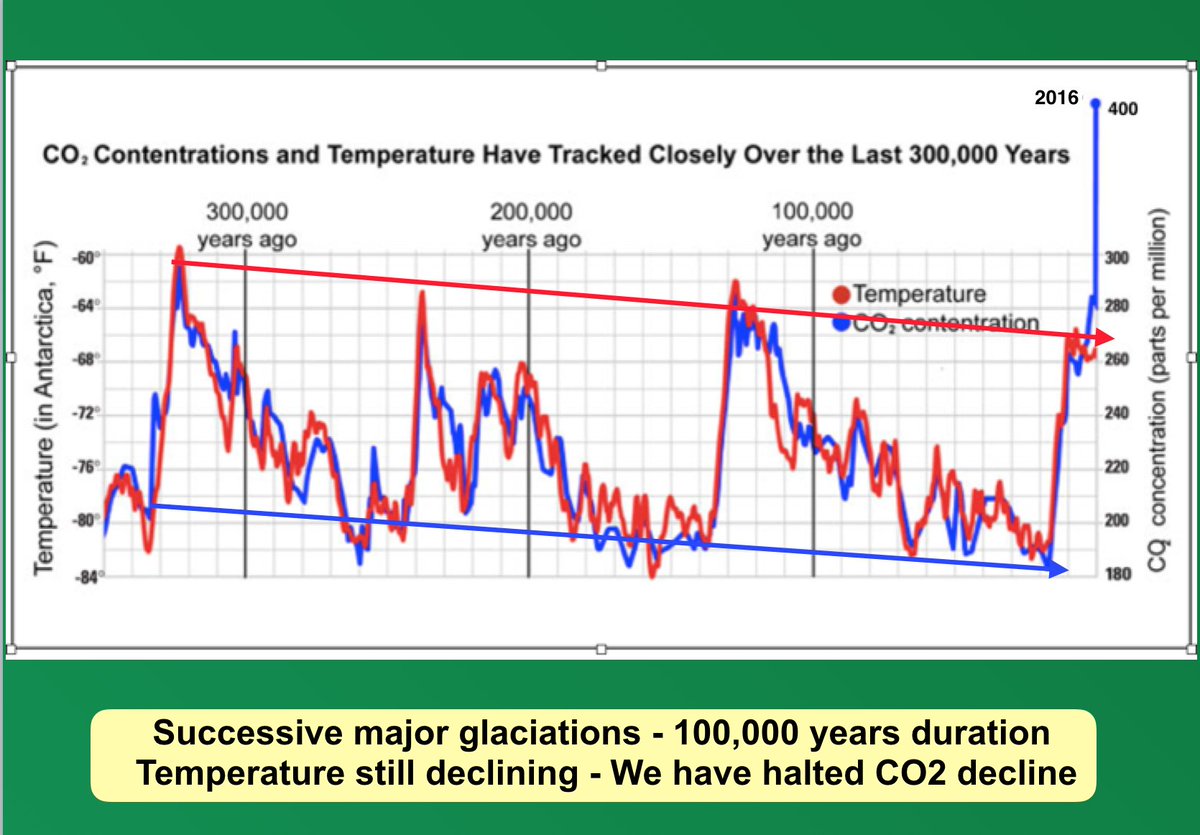 But these graphs are very misleading, which becomes clear when one examines the original data analysis for the Antarctic ice core:

(In section 2.8 of "Myth: Attributing Warming to CO2 Involves the Fallaciously Inferring Causation from a Mere Correlation", I rebut the argument that figure 2 undermines the case for CO2-induced warming, since figure 2 shows that CO2 increases lag temperature increases.)

Thus figure 1's recent CO2 increase from 280 parts per million (ppm) to ~400 ppm was not present in the original Antarctic analysis presented in figure 2. This CO2 spike instead likely came from data collected in Mauna Loa, Hawaii up to the year 2015 [12]. Figures 2's CO2 and temperature estimate stops by about 38 "years before present" [10; 11], where "years before present" means "years before 1950" for ice cores [9]. So the ice core estimate stops by about 1912. Myth advocates add recent CO2 data to this analysis without adding recent temperature data. They then use this to argue against CO2 causing recent global warming [1, from 11:26 to 13:42; 2 - 5; 36 - 41; 51, figure 110]. But the myth defenders' argument fails, since the myth proponents excluded the recent temperature data needed to justify their conclusion.

"It is, however, important not to confuse denialism with genuine scepticism, which is essential for scientific progress. Sceptics are willing to change their minds when confronted with new evidence; deniers are not [33]."

"The crucial difference is that your colleagues will accept a scientific statement if provided with sufficiently strong reasons to do so. In contrast, climate science denialists, like other pseudoscientists, tend to be driven by motives that make them impossible to convince, however strong the arguments they are presented with [34]."

Myth proponents engage in cherry-picking if they use this Antarctic trend to argue against recent global warming, especially since figure 3 shows warming elsewhere in the world and there is abundant evidence of Earth's surface warming [18; 27; 52 - 69]. In contrast, figure 2 does not commit cherry-picking, since climate scientists also use proxies outside of Antarctica to confirm warming [82 - 85]. But suppose Antarctic proxies were the only proxies available for temperature changes in the distant past. Then scientists would still not be guilty of cherry-picking in their use of figure 2, because the charge of cherry-picking does not apply in situations where one only has one option to choose from.

Returning from warming in the distant past to more recent warming: the industrial-era warming from figure 3 likely under-estimates the warming caused by CO2 increasing from 280ppm to ~405ppm. This is due to thermal inertia [42 - 46; 92; 96 - 98] and the fact that Earth has yet to reach an equilibrium state [23, section 5.2 on page 1373; 24, sections 2.3 and 2.4 on pages 5 - 6; 47 - 50; 92; 96] in which Earth stops warming because Earth's release of energy into space matches the solar energy Earth takes in [14 - 16] (I discuss this more in sections 2.2, 2.5, and 2.8 of "Myth: Attributing Warming to CO2 Involves the Fallaciously Inferring Causation from a Mere Correlation"). So even if myth proponents modified figure 1 to include industrial-era global warming, they would still fail in their goal of arguing that CO2 does not cause a significant amount of global warming.